When the Chinese artist Chiang Yee visited the International Exhibition of Chinese Art in London, 1935, he felt slightly embarrassed. Although it pleased him immensely that the exhibition was a huge success, drawing thousands of visitors, Chiang Yee found that it did not manage to guide the public’s attention beyond the decorative qualities of Chinese art.

Especially in the section dedicated to calligraphy it was evident that people were left to admire the strokes, splashes, and blobs woven together to form the happiest patterns, as they were given no guidance of how to interpret these signs.

Chiang Yee felt that this was a display of disrespect: to Westerners with a desire to investigate intelligently the significance of Chinese calligraphy–and to the tradition itself, not the least. As he was himself an experienced calligrapher, known as The Silent Traveller, Chiang Yee decided to offer his services and it was agreed that he could hold a series of lectures at London’s School of Oriental Studies.

To prepare for these lectures, Chiang Yee wanted to learn the Westerner’s attitude towards Chinese art, and especially to calligraphy. Curious to know how Westerners approach a subject with so little affinity to the cultural context of the West itself, he read a number of books where he was repeatedly met by well-informed research wrapped up in a diffuse discourse of wondering comments and mistanken conceptions.

It was not due to intellectual incapacity or a lack of factual knowledge that a discursive mist tended to surround the subject of Chinese calligraphy. Not at all. Chiang Yee had only the greatest respect for the dedication and discipline of the authors. No, it had to do with the attempt to make an analogous comparison of the alphabetic letter and the Chinese character: a method that simply did not work because alphabetic letters and Chinese characters belong to two radically different sign systems.

Instead, Chiang Yee concluded, a comparison of the alphabetic letter and the Chinese character had to be conducted according to difference. Observing dissimilarities in the formal arrangement of words and sentences would open the Westerner’s eye to the significance of Chinese characters.

Take the degree of variation of arrangement, for instance: whereas the alphabetic arrangement has little variation, due to the finite and limited amount of letters, the formal variety of Chinese calligraphy is unlimited because each character is a composition of several elements and therefore infinitely construable.

Also in the everyday use of letters and characters immediate differences are apparent. Referring to the appearance of shop-signs as an example, Chiang Yee found that the formal qualities of alphabetical letters are transferred into shop-signs that strive towards stylistic identity, while, on the other hand, the Chinese characters effectuate shop signs that tend to appropriate the situation and the context of their appearance.

As his research progressed, Chiang Yee realized that the two sign systems have very little in common, if anything at all. Every aspect he studied added just another disconnection, another disruption, to the overall picture of his comparisons that became still more complicated to get hold on.

How could he, for instance, explain to a Westerner that in Chinese there is not one character only for such a thing as water–of which there are many forms: rivers, lakes, seas, oceans, etc.–but several, each describing a different form of water, down to distinctions between great and small rivers, calm and rough seas? How do you compare this mass of ever changing characters with one single word?

The more comparisons he made, the less was he capable of holding the two sign systems together. The more he insisted in doing so, the more they came apart. Worlds apart. As if one world, the Chinese one, is build from characters that comprise thought, sound, and form; as if this one world gains appearance by a continous animation of the same matrix. And as if the other world, the West, originates from words composed of sound symbols intended for pronunciation; as if this other world comes into being by an incessant torrent of speech.

Chiang Yee saw that a comparison conducted according to difference would only expand the distance between the two sign systems. But that was not his intention and he sensed that another way of thinking was needed. He had to leave the alphabetic sign system to itself. He had to commence his lectures from within the world of Chinese characters, so to speak, and decided to make the legend his point of departure.

Accordingly, Chiang Yee began his lectures on Chinese calligraphy referring how Chinese characters were invented by Cangije, a bureaucrat under the legendary Yellow Emperor. Inspired by his study of the animals of the world, the landscape of the earth, and the stars in the sky, Cangjie invented symbols called the first Chinese characters. And the legend relates that on the day the characters were created, people heard ghosts wailing and they saw crops falling like rain. 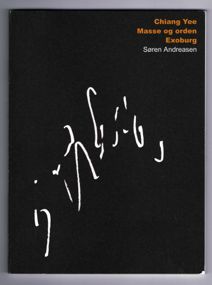