L’Indifférent. 1717. A painting by Jean-Antoine Watteau. Quite small. 25x19 centimetres. An young man posing in a park. Slightly awkward. In the twilight. Wearing dancing shoes and dressed in silk. Glistening and floating.

Until recently, Watteau’s paintings were merely considered to be decorative aestheticisations of the Rococo life style, representing the regime of le Roi-Soleil in a courteous atmosphere of visual pleasure and frivolity. When art historians like Mary Vidal began to analyse his work in relation to the dominating art form of the Rococo period, the art of conversation, it became, however, apparent that Watteau’s paintings were not mere literal descriptions of social behaviour but represented conversation as part of an aesthetic, linguistic, and ethical system: as an art of living.

The art of conversation is linked to a fundamental change in epistemology. Until the seventeenth-century, knowledge was conceived of as existing prior to human thought, while in the Rococo period, men and women began to conceive of themselves as the creators and organizers of knowledge. The art of conversation is thus a pursuit of language as a speech act: the representation of thought in the process of reflecting upon itself, accentuating qualities of conversion like spontaneity, improvisation, and intimacy.

Watteau’s ambiguous treatment of motif and technique is thus to be considered an advanced principle of articulation rather than a symptom of cultural and artistic conformity. This is a principle that is very explicit in his ambient sceneries of cruising aristocrats occupied with courting and conversation. But most intriguingly present in the few paintings representing one single figure. Like L’Indifferent. To articulate the liberal living of emancipated human beings is one thing. To articulate the inner life of a free individual is quite another. And as the representation of one human being obviously cannot involve the practice of conversation, what is this painting about, then?

The aesthetic programme of the Rococo period was all about intimacy. The intimate sensualism of social and intellectual interaction. The rousing desire of self-realization and emancipation. Interior design, coffee, and conversation.

However, the liberal attitude towards gender, knowledge and social conduct, which were such significant aspects of the Rococo period, was still framed by the social and cultural order of the aristocracy; although the aesthetic programme of the Rococo period, in principle, stimulated human emancipation, it worked in effect to reproduce and secure the equilibrium of aristocratic society. In other words, this is an aesthetic programme of ambiguity, inasmuch as Rococo art, on the one hand, promotes human emancipation, while on the other hand, it consolidates social and cultural hierarchy.

L’Indifferent does not circumvent this schism. In this painting, Watteau’s treatment of motif and technique appear in states of affect, influenced by the experience of emotion. A carefully calculated representation of affect, that is; this is not an expressive painting but a perfectly mastered representation of the virtues of spontaneity and improvisation that instructs the perception of the painting. Its size, for instance, is less than an A4 sheet of paper, and you have to stand very close to the canvas in order to observe the particular qualities of the painting. And there, with your head almost absorbed by the surface, a synthesis of motif and paint floats and modulates. In contrast, Watteau’s treatment of composition is quite simple and easy to read from a distance. The figure of the young man is placed at the vertical centre, with a diagonal line in the background separating park and sky, shade and light. The arms of the young man form, in continuation of each other, a corresponding line, producing an overall sense of equilibrium. A unified whole in perfect balance.

This is an ambiguous painting. Transparent on the macro level. Opaque on the micro level. While the particular aspects of the painting seem free-floating and plastic, the overall composition consolidates an absolute equilibrium. Composition is not affected by motif and technique, and the question is raised of whether this ambiguity represents a fatal exposure of contradiction, or if it is an intentional principle of articulation. Is this painting a symptom of cultural self-contradiction, or is it a deliberate effectuation of ambiguity? Is it an exponent of a cultural end game, a meltdown? Or is it a cultural rudiment, an image of worlds to come? Rhetorically speaking, does L’Indifferent represent an antithesis to Modernity or is it a first glimpse of Modern Man?

If L’Indifferent is thought of as a rudimentary form of Modern Man, coming to life in between the promise of emancipation and the consolidation of social and cultural hierarchy, then ambiguity is indeed an advanced principle of artistic articulation, accentuating ambivalence, the state of having simultaneous conflicting feelings, as a general precondition for self-formation.

It is hard to avoid associations to discourses of alienation here, especially because such discourses emerged during the Rococo period, for instance in the writings of Jean-Jacques Rousseau. As a concept, alienation was derived from a feeling of disruption and conflict within the self that was interpreted as an emotional reaction to the progress of civilization. Within a society that was increasingly characterized by urban development, the division of labour, ownership, and inequality, the nature of man was conceived of as corrupted, accordingly evoking a feeling of estrangement from a society that was nonetheless the product of man himself. The state of alienation was thus seen as a consequence of a growing separation of nature and civilization that becomes a precondition to formation of the self, and the question was raised about how to heal this inner disruption: either by re-creating the natural harmony of the self or by counteracting the progress of civilization. Or both.

Although L’Indifférent came to life in the early days of Rococo, whereas discourses of alienation developed during the later stages of the period, a symbolic disproportion between nature and civilization is clearly apparent in the painting. Not only is the young man posing in a park, an effective metaphor for cultivated nature, his presence as a human being is thoroughly mediated by the dress code and posture of the galant style, the fashion of light elegance. Only the young man’s hands and face are laid bare. The hands are expressing a theatrical attitude. The face has an ambivalent, almost apathetic, expression that has given the young man his name.

What is this painting about, then, if it is not a representation of the ambiguous qualities of a society that promises human emancipation while simultaneously consolidating social and cultural hierarchy, thus evoking an experience of conflicting emotions, a feeling of ambivalence, within the human self?

In its day, L’Indifférent was merely consumed and praised as an object of pleasure by a public of aristocrats and citizens with noble ambitions. Thus the ambiguous qualities of the painting were most certainly perceived of as playful and subtle teasing, evoking a thrill of mixed emotions. But the public’s attitude in the year 1717 does not contradict a reading that involves the historical and ideological time and space surrounding the painting. On the contrary, the praise and desire for ambivalence expressed at the time the painting was made are just other indications that L’Indifférent does indeed represent the becoming of Modern Man. 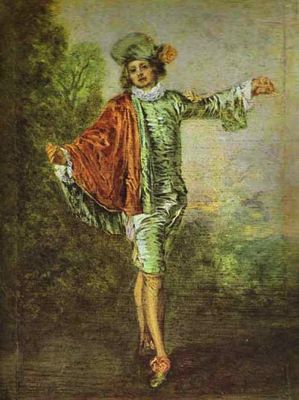