A and I make conversations. We do so when the spirits are high and we have the time to take an interest in each other’s ways of thinking. As nothing is worse than a friend who proposes opinions, wanting to instruct the mind by force, A and I make conversations that follow the time and space of our thoughts, floating along the various formations of consensus, conflict, and pleasure.

On one such occasion, the cultural figure of the artist became an issue that caused a direction which none of us anticipated. Maybe a certain routine, or even a certain arrogance, had gained influence on our friendship; I’m not sure.

However that might be, it had become a fixed assumption that A and I represent divided positions, best described as one of involvement and one of affectation, which characterize each of us as practitioners of art, and mark out the terrain of our discourses. And, once more, these positions formed the starting point of a conversation.

A’s position is the one of involvement. To A, art is a culturally determined structure. An artist has to be active in as many aspects of this structure as possible because the artistic objective is to gain influence on the given cultural system. The relation between the specific involvement of an artist and the general conditions of a cultural system is the motor that drives art, generating constructions and situations that are dissolvent and formative at the same time.

A claims that the specific involvement of an artist is different from that of a psychosocial individual in the sense that it is imaginary. An artist comes into existence only when a specific involvement is represented in the given cultural system, and only then. An artist has to be culturally functional to exist, in other words, and is thus basically a representational and hypothetical figuration that repeatedly has to come into existence.

This is more or less how A is thinking, and accordingly A is involved in a multitude of operations that cover a wide range of the terrain which is culturally recognized as art. From the materiality to the logistics and semantics of art. From the production to the institution and politics of art. Pretty confusing at times, not least to A, who has to change mode of operation all the time and is seemingly only saved from an entropic meltdown by the moments of clarity or escape provided by the assumptions that art is culturally determined and that the artist is an imaginary figuration.

Why is this, I ask? Culture is a symbolic order and symbols are construable signs, A reminds me, and since any involvement seeks to gain influence within a given cultural system, it automatically aims to change it. Any involvement represents another, imaginary, version of the system. A holds that art is exactly that: a permanent negotiation of the construable signs and the cultural system they constitute. The specific involvement of an artist represents a future version of the symbolic order that constitutes a given cultural system, and the artistic objective is to gain influence here.

At this point I lose my concentration. This is too abstract. I am an affected existence, I tell A, whereby I deliberately pass into a caricature of myself. Not that I am more self-centred than most, but because a caricature appears to me as the best form of abstraction to illustrate the difference between A and I

I am the one of affectation. I am a meta-nervous existence, I explain to A, asserting that art is determined by the human nervous system.

A complains loudly when scepticism is used directly as argumentation. I agree, and this is not my intention either. This is not an argument. This is an affectation.

If I were to state the reasons for the determination of art by the nervous system, I would refer to the neural faculty of anticipation and accentuate the neural preoccupation with the future versions of time and space exterior and interior to themselves. More specifically, I would point towards the ways in which the human nervous system constantly calculates and mobilizes future versions of itself, and I would claim that these processes are what we refer to when talking about experience. I would point out that influx is a precondition to the neural faculty of anticipation, emphasizing that impression is not taken to be experience but is regarded as a precondition to experience. The capacity to be affected is, in other words, of utmost importance. When it comes to art, being affected is an act of will, which is why I characterize myself as a meta-nervous existence.

Anyway, this is an affectation. The lightness of mind and matter is my objective, and by letting my voice become affected, it is as if I hear nothing much but the reverberations of words and sentences that might be formed. Whether this is good or bad, I have no idea.

Affectation has no other standards than its own intensity, which is why, I inform A, the artist has to be a carefree existence that unconditionally aims to stimulate the nervous system in order to calculate on the future versions of itself. The artist comes into existence somewhere beyond the superstructural and immune mechanisms of doubt and self-control. Why? Because I am too obvious. I am the general effect of the neural faculty of anticipation, a pragmatic presence, when compared to the future of the neural calculations. I am an agent of the symbolic order. I am a cultural functionary. Convenient and expedient but not very exciting. I am an idiot.

At this point, A opts out. This is too abstract, if anything at all. Yes, clearly, I am in affect, A agrees, and clearly my voice is getting lighter and out of control, but what else do I obtain but a weightless wipeout of my self? The sweep, I answer. The sweet sweep of abstraction.

Let’s move on, A suggests. Okay, I reply.

We hang around in silence. Just for the sake of it. Zen-conversation, that’s what we call this mode of behaviour. Our knowledge of Zen is quite superficial and, like most people, we think of it as some sort of absolute and carefree presence. Pure action. Pure form. Wireless. Something like that. This is a lifestyle performance, A claims, when we are hanging around like this. To me, it is a charming waste of time, but we agree that this is a fine way to spend time together.

We find ourselves in a terrain of brightness and clarity.

I ask A where the light comes from. A does not react. The light surrounds us. The terrain seems to expand and condensate at the same time. A mist of photons. This is how it appears to me.

The distance between A and I has increased by now. A passes in a flash. I fly by A. Once more, I ask where the light is coming from. But A does not react.

A has observed something that looks like a flower. A formation of fibres and surfaces. Matted fibres and a system of surfaces.

Within the system of surfaces, an accumulation of fibres extends itself in varying degrees of density, sticking and clinging to the surface elements. Here and there, the tangled fibres form a greasy mass, or they appear in the shape of an improvised and growing model of a molecule.

Apparently, the fibres sustain and dissolve the surface elements at one and the same time.

Each element of a surface system has a liquid consistency, glistening, and a sharp and distinct contour. The elements are clearly separated, organized according to a spatial principle or logic. Like a bowl of glazed porcelain right after it has been smashed into pieces. Just when it is still possible to sense the contour of an overall form, although the bowl is exploding into countless bits and pieces.

I observe quite a few formations of this kind. Various types of formation. When comparing two flowers, A immediately discovers two separate species. One flower is formed like a fountain of tongues. Another flower has the appearance of metallic and phosphorus seaweed. The more we look around, the more variations we detect. Bubbling, glistening, and creeping formations. And many more. The variability seems endless, although the flowers appear with a unified set of qualities: they are all growing, transparent, and light.

The quality of lightness catches A’s attention. A observes that the lightness of these formations reveals a vacuum. Apparently, each formation produces a vacuum. The fibres are active around this vacuum, whereas the system of surfaces surrounds it, functioning as a permeable and transparent shield. Together, the fibres and the system of surfaces generate a lack of substance within which another formation of time and space arises. A negative terrain, somehow. A sphere of futurity.

A and I enter the vacuum of one flower. I notice that the temperature is different in here as compared to the outside. Almost imperceptibly so, but still. And I find that the light is slightly stronger here, as well. It is no longer possible to distinguish between fibres, surfaces, and vacuum. By now, our senses only register the changes in temperature and the intensity of light.

A is determined to understand the formation in detail. A wants to know whether there is any substantial distinction between the fibres and the surface elements, or if they are rather to be considered variations of the same substance. In this way, A speculates, it might be possible to decide whether the formative effect of fibres and surface elements have to do with substance or variation.

To conduct this investigation, we will have to leave the vacuum. We decide to go back. We prepare to return to the outside. We cannot. We are blinded. As if absorbed by the vacuum. We realize that we find ourselves in a sphere of futurity.

After a while, A draws my attention to a greyish shade at some distance from us. According to A, this is a negative light. A hole, I cry out, just what we need!

Imagine the sun breaking through a thick mist, but inverted, that is what we experience, A says. And true enough, the density of the shade increases until a keen circle of darkness appears right in front of us. It grows. Slowly. And, eventually, darkness is all that we see. 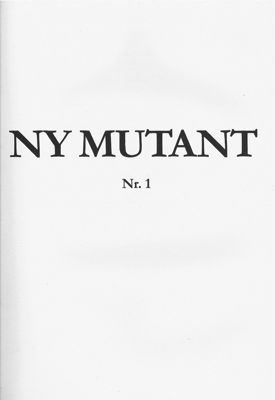