This question has to do with that which cannot be thought of as work. It is an attempt to escape the current use of the notion of ‘work’, and the way this tends to cover modes of behaviour that have nothing to do with labour. And it is a meditation on the aesthetic experience as an aspect of our lives that is not work.

In an interview from 1983, The Minimalist Self, the French thinker, Michel Foucault, was asked if there was a special kinship between his kind of philosophy and the arts in general. Foucault replied that to him, intellectual work is related to aestheticism, meaning transforming your self. Aestheticism refers to the ancient Greek practice of forming one’s life as a work of art, and Foucault suggests that the transformation of one’s self by one’s own knowledge is equivalent to an aesthetic experience.

This is to say, an aesthetic experience has to do with the appropriation and not with the production of objects, be they material or be they immaterial. A reality principle constituted by the effect of things. How objects affect you. How the qualities ascribed to objects are dissolved, abstracted, and mediated. How an object is read to bits and pieces, so to speak, affecting the emotional and cognitive constitution of the one who reads.

One’s own knowledge is thus related to the becoming of one’s self. When an object affects you in ways that you did not anticipate, the constitution of your self is put into question. You either have to reject the effect of this object or admit to your lack of knowledge, re-thinking your self accordingly. Becoming quite other.

To engage your self in reflections on the effect of objects was called ‘contemplation’ by the ancient Greek thinkers, meaning to admire something and to think about it. An awareness of that which has nothing to with your self. Being affected by something that is not of your own origin and speculating about it.

In the editorial framework of an anthology called Kreation und Depression: Freiheit in gegenwärtigen Kapitalismus from 2010, creativity and self-realization are thought of as imperatives in the current configuration of capitalist society. Here, the majority of people are forced to sell their ability to work in order to make a living, and when functioning as mere prescriptions for ready made role models on the labour market, creativity and self-realization are motivated by compulsion rather than freedom. Thus, the self is situated within a state of prescription and constraint, which has been diagnosed as a cause of depression.

One of the essays in the anthology, Ästhetische Freiheit zwischen Kreativität und Ekstase, by Dieter Thomä, points out that the ancient Greek conception of aestheticism implied a combination of contemplation and creativity. Or as Thomä re-formulates these, adapting the locutions to the current terminology: reception and production. Furthermore, these two interlaced aspects of aestheticism were conceived in continuation of one another: contemplation first, creativity second.

According to Dieter Thomä, the current notion of creativity dominates the aspect of contemplation to a point where neutralization sets in, and has therefore little to do with aestheticism. Or ‘Ästhetische Freiheit’, as Thomä prefers to say, claiming that the conception of creativity and self-realization in contemporary capitalist society effectuates a caricature and a perversion of aestheticism.

Considering this diagnosis of the society in which we live, the need to question the expansive influence of qualities ascribed to the notion of ‘work’ is emphasized. To ask ‘what is not work?’ is a way of pursuing the limits of the notion of ‘work’ and that which is situated at its outside. That which cannot be thought of as work.

Accordingly, an attempt to escape the notion of ‘work’ represents a sceptical attitude towards the current significance of the notion of ‘work’. A reluctance to acknowledge and reproduce the ways in which qualities ascribed to work influence aspects of our lives that have nothing to do with labour.

To meditate on the aesthetic experience as an aspect of our lives that is not work is more of a speculative effort. A thought experiment concerning a reality principle constituted by the effect of objects. Engaging one’s self in reflections on that which is not of one’s own origin. Contemplating your lack of knowledge. Becoming quite other. This is not work, is it? 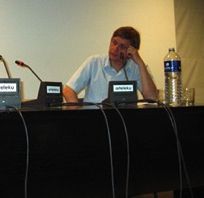